dfbm #82
Songs of Wild Nothing 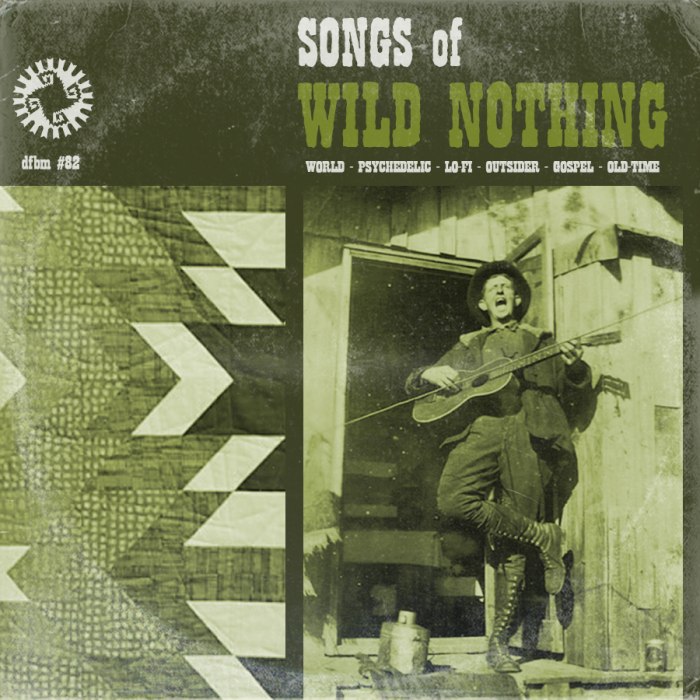 Wild Nothing is like an elaborate dream. A lot of wild things happen and then you wake up and there is nothing left. In the worst (or best) case there is an echo that fades away. It's similar with the music: so much music got recorded in the past, so much music is fading away. In many cases, records got digitalized and stored, which itself is the echo of a once released vinyl album, cassette or a cd reissue. At some point all digital music will be lost. There is almost no notation of this music, like with Beethoven's work and playable copies or devices will vanish. Maybe folk songs will survive. Folk songs about computers, algorithms and facebook.

Whatever, I just tried to make sense out of the title - I might make this a new series, next to the Morning Raga.

Spread over two hours, this mix compiles music from all over the world. Ethnic recordings are paired with contemporary songwriters, outsider gospel, fingerstyle guitar, blues, avantgarde music and bedroom productions. Tracklist and download and a little contest, see below. You can win something!

The story of Chemirocha is a fascinating one. A field recording made in the 50s of a Kenyian tribe who is singing about Country Legend Jimmie Rodgers a deity half-man half-antelope.

The Renaissance is a church group that I would describe as a mix between The Polyphonic Spree and recordings by the Manson Family. Very basement sounding stuff pressed on wax and almost forgotten if not somebody took the time to transfer it into the digital age. The New Creation is a similar gem and probably better known since it already got reissued. Outsider-Gospel at its best.

Contrary to that is Anton LaVey, the founder of the Church of Satan, with his version of "Kingdom Come" (The Year of Jubilo), an American Civil War song. It's all played on a synthesizer, even if the banjo and the cornet sound pretty real - that what the liner notes says. The 10" "Strange Music" is a weird record, but it makes sense for someone who was close to Boyd Rice, an expert of incredible strange music and the weird aspects of American pop culture. LaVey's daughter Zeena Schreck continued to make weird music.

Leo Wijnkamp Jr. is one of many guitar pickers from this wave of solo guitarists in the seventies. He released on Stefan Grossman's Kicking Mule Records label. I think that gives you an idea of the music. Solo guitar ditties, rags and blues - nothing groundbreaking, but there is one or another little gem

Slide guitar is not only played in Hawaii by the Sol Hoopii Trio it's also played in Vietnam by Nguyen Van Thong.

A curiosity is the song The Steam Arm by Jerry Henderson. Some sort of science fiction folk about a prosthetic arm that got - out of hands.

Buell Kazee is my favorite banjo guy. I am happy that I found a copy of his June Appal release from 1978. Not only because the cover artwork looks like a post-punk record from the eighties, but that was a major reason to try and find that record and I just love Kazee's music.

Leonard Bowles & Irvin Cook is an old time duo that I found in the online collection of some university (see link below). That's one of the rawest fiddling and banjo playing I've ever heard. It's awesome (heads up to Daniel Bachman who introduced me to this via his Smithsonian guest mix).

But this is not all about dead artists. There are the caveman serenades by Urpf Lanze, Belgian visual artist Wouter Vanhaelemeesch and urban lo-fi blues by Ignatz. Weird loner folk/noise by bodytunnel some obscure solo project from Brooklyn, a great new tune by Norwegian loner folklorist and old-time aficionado C.Strøm. (Fellow Scandinavians on this mix are Moongazing Hare from Denmark/Sweden and Swedish psych folk ensemble Harvester)

The Moses Nesh song is from his recent release here on Dying For Bad Music. You can still buy it!

The Robbie Basho song is from the latest reissue of an private cassette that the good people at Grass-Tops Recordings restored and released as free high quality download (along with tons of other Robbie Basho stuff).

I know this is a pretty weird mix were it goes from questionable personalities like Manson or LaVey to preachers like Buell Kazee or Reverent Robert Wilkins, from American folk to cell phone recordings by Abba Gargando and further to guitar poetry from Japan - but, music is the key!

The cover to this mix is an adaption of the artwork from a folk label that released a handful instructional records back in the late 70s, to learn various stringed instruments. The label is out of Florida and probably still active, at least there are reissues on cd available. Notable is the quilt they used as background image. What's the name of the label?

Send your answer and win a Dying For bad Music t-shirt (if you can wear a slim size M, else no shirt) and a last copy of Daniel Bachman's 7" Perigee Moon + a last copy of Steven Palmer's cd "Unblinking Sun".
A second prize will be either the Crystalline Roses or the Moses Nesh cassette.

TL;DR
Give me that Old Time Religion...