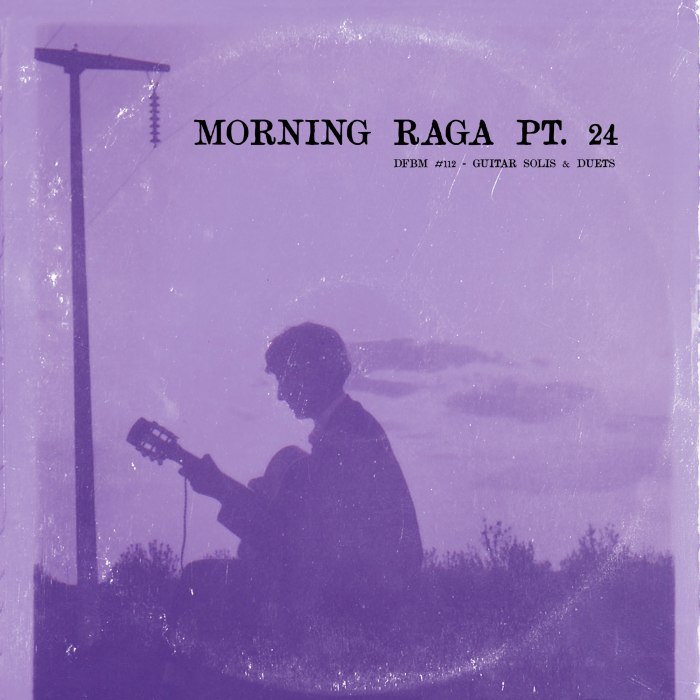 Here is the 24th booster shot of steel-string solo acoustic guitar from North America and Europe. The shots are more spaced out these days, and there is no immunity in sight for me... I mean for making these mixes. I still love this music.

It's another two hours of old and new, somewhat known and lesser-known guitar slingers. Since there is an increased chance that someone calls the cops if I mention American Primitive or god beware use Finish or French Primitivism to describe the music, I leave it up to the listener to categorize this music centered around a funny shaped piece of furniture with steel wires stretched across the entry hole1.

Gregory Rago was one of my favorites finds on Bandcamp, seven years ago. Takoma School guitar with a cello that sounded like Rago has some roots in post-rock or even black metal. A few weeks ago I got a really nice mail and the link to a new record of Rago. I've got to say, I appreciate an underwhelming release cycle. Quality over quantity.

Kadonnut Manner from Finland teamed up with another Fin named Joakim Oinas and they released a split tape this year, that includes a wonderful guitar duet that can only be topped by the even more handsome duo Martin Kolbe + Ralf Illenberger and their piece "Waves" from their 1978 album with the same title.

American Medley is one of my favorite pieces off Woody Harris 1974 Arhoolie Records release. Harris released some music with Mike Bloomfield who might be known as one of the 2nd (?) generation of Fahey or Kottke-inspired guitar players. Tompkins Square Records just released new music by Harris, so I thought it's a good choice to add some early recordings of his.

My friend C.Strøm is alive and well and started recording new old-time music himself, after getting into the museology field and exploring a new world of music in pitched down 78 rpm records. Check out his Bandcamp The sound of shellac with compilations of track and how Christian thinks they should be played2.

Hayden Pedigo is a jack of all trades, a handsome devil, and a gifted guitar player. No matter if he runs for public office, models for Chanel or Boss (too lazy to look it up), imitates John Maus, or plays guitar. It's well thought out and successful. Now, nobody is successful with every single project, so what are the things Pedigo failed with? I need to know, to feel better. For his new album "Letting Go" he put corpse paint on, burnt a bunch of stuff, and recorded an ambient/solo guitar masterpiece with some really cool cover artwork.

Also worth mentioning is Xisco Rojo album Transfigurations that's a really deep and well-executed psych-folk I'm having a hard time describing. But visit his bandcamp page to find out more. it's a soundtrack to time travel.

And file under small world: I got an email teasing a solo guitar record by a German artist that is quite unknown and indeed I've never heard of him - Alexander Möckl. I was curious and excited. Even more when the owner of the relatively unknown label Randstock told me that he attended the "Incarnation of the 1000 Rose" guitar fest in Takoma Park. We potentially met before we knew each other. Awesome. And Alexander Möckl released in the past with people I know. Story of my life.

Möckl's album Ich-Me-IO will be released in January 2022 as a limited handmade 12" record in the spirit of the American private press record era and consists of intimate solo guitar sketches, that sounds neither American nor particularly like German guitar music that got influenced by American music. But I can feel the spirit of both.

Oh and Tomáš Niesner blows me away every time!

Please consider buying a t-shirt and share the mixes. Thank you for listening.