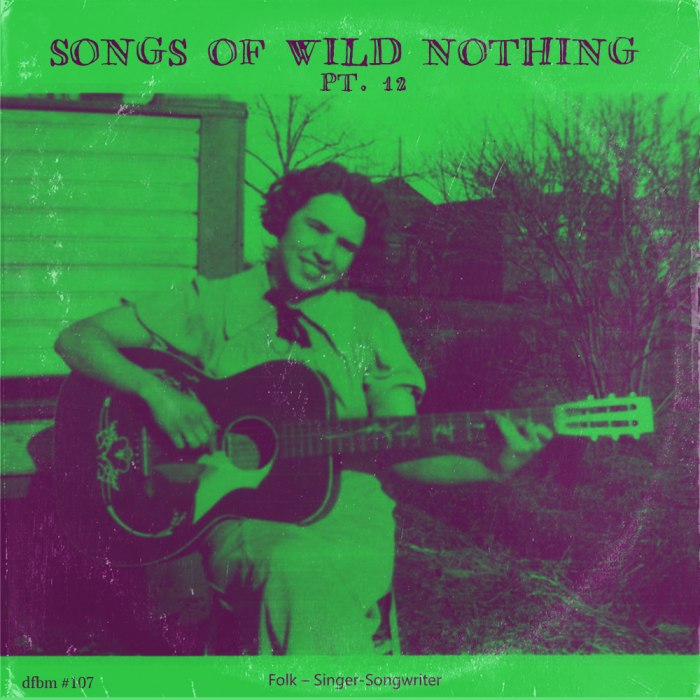 For nr. 12 of the Songs for Wild Nothing series I compiled some really sweet tracks from the last 40 or so years of mostly self-releasing singer-songwriters.

Starting off with Lucky Luke, a Scottish psych-folk-rock collective from the mid 2000. Back then I downloaded a 7" from some obscure music blog and was always wondering if there was more of Lucky Luke, but I either forgot to seek it out or ended up with the comic character. But at the end I was able to get my hand on their whole discography and I'm spellbound by their music.

I got to know Phil Glauberzon aka Psychic Lines, when he was on tour with Zachary Cale in 2015. Not too long ago he released a second album and it shows again what a phantastic songwriter and musician Phil is. I prefer that over any solo record by one of the The Walkmen dudes (this was the first name that popped in my head).

An album that grew with every listen is Tom Brosseau and Sean Watkins renditions of Carter Family songs. Everytime I listen to it I like one song more. It started with Through The Eyes Of An Eagle and didn't end with Chewing Gum yet. I'm also looking forward to Vol. 2

Alcantara by Helena Espvall is a room filling, droning cello piece from the Jack Rose tribute compilation Ten years gone. I'm not sure if it's actually a Jack Rose piece, but you can imagine how he would have played on guitar. How powerful this sounds on just a cello - highly recommended compilation!

When Ryley Walker came on his first EU tour with Daniel Bachman, his version of Rosmary Lane was my absolute favorite of the whole evening they spend at our place. Later, Ryley Walker and Daniel Bachman continued for some more touring until they went each their own way. I'm glad I recorded a stream of a radio show at WBAR that consisted of a version of Rosmary Lane played as duo by Walker and Bachman. I think that piece is quite rare in this form.

Next one is Joseph Allred, one of the most prolific guitarists right now. He released quite a lot over the last months. Mostly solo acoustic guitar or banjo instrumentals, but on his latest album Traveler, Allred sings on two tracks. The words are somehow sad, but he sings honest and beautifully. Keep up singing Joey!

Linda and Tim's Golden Apples Of The Sun might have been the inspiration for that freak folk compilation by Devendra Banhart. Or maybe it was the Ray Bradbury novel. Who knows. But thanks again to @erretter who was sharing this beautiful album with me.

Jim Kennedy's private press is an album I always come back to. He's still playing music in a jazz band I believe, but this is a real loner folk masterpiece from his early days. Well, maybe not a masterpiece, because else it would have been already reissued, but I love it and it's a bit obscure.

Alex Fergusson is one of the founding members of the punk band Alternative TV and Psychick TV. In his later years he released three albums with some really cool folk songs, some VU rock jams and the goth banger Dark Angel. Worth checking out.

Grace Cummings got quite some praise in my twitter bubble (via Avant Ghetto's Jeff Conklin) and it's a refreshing, timeless sounding record that you should not miss.

Dell Dudenhoeffer "Sings The Songs Of Edgar F. Penzig" sounds awkwardly like "Ute Lemper sings Berthold Brecht", but it's not about the struggle of the working class, but poems sung by an expert in Asian languages.

It's always fun to find some trivia in youtube comments:

Sadly, Egar has now died.He wrote many books on the history of Bushranging,several plays and poems, and as we can hear was a good songwriter.When I spoke to him about this recording, he had lost contact with Dell and assumed she was married with another name. He was right.She even sat for State and Federal elections in recent years, but didn't win.Sadly, she never recording again. What a great voice she had back then. Luckily I have her 2 copies of the LP. (source)

While waiting for a new Allysen Callery album, I picked a track from one of her last record Prince's Pine which came out in 2017 on the super prolific Reverb Worship label from the UK.

I want to close this (not the mix) the odd 7" by Cynthia Kellems - I have no idea what this is about, a weird sounding true outsider art piece on a label that released only this one record, posted on youtube and hard to find if you don't seek it out. I believe I found it on a now deleted outsider music blog. Too bad this kind of stuff disappears into obscurity for the second time.

I hope you'll enjoy his mix and share it with whoever might like this (even if this loner folk stuff is best enjoyed alone, late at night, with a gin tonic or lukewarm unsweetened tea, reading about obscure music on the internet, as I do when I compile this stuff)

As always, you can support DFBM by buying a t-shirt and share the mixes. Thank you for listening.