With Quintorian Blues, Frank Hurricane recorded a true American record. Released on Feeding Tube Records (which is both a store and a weirdo-noise label in first place), you’ll find this double album at the intersection of Spoken Word, American Primitive solo guitar, and Blues. It’s a funny and exciting (in Frank’s words “a holy”) trip through America. It has it all: dudes and pimps and gangastaz who share their weed and beer, time and space with him. It’s equivalent to a sonic road movie. 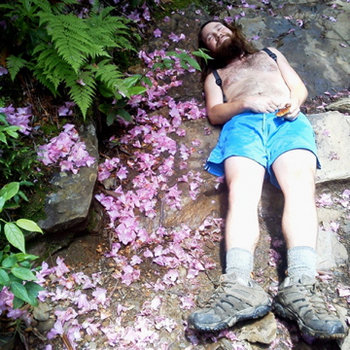 The album starts with a short fingerpicking tune and then Winter Home Story begins. Frank tells the story of hiking into his favorite mountains in Tennessee, with some of his "psychedelic" friends to show them a holy place. Unfortunately they got caught by a snow storm, but there was this shelter on the trail and they spent the night there, but not alone:

This may read a bit odd, nobody would write like that, but when Frank tells it, it makes sense and it's fun. So it goes on and on. You can follow him through the mountains and through the U.S., up into Canada and back. They stuck at Moses Lake with a broken car and met all those crazy people like the car towing guy and the forth grade friends brother with the high pitched voice who fixed their car. It's all highly entertaining and "off tha chain".

I found myself listening to his spoken word parts more than to the songs itself, because it's highly entertaining and he's got the flow to tell the story and picking fine patterns out of his guitar.

Frank is simultaneously a nature boy hippie and an urban gangster rapper who drops rhymes about spiritual thangz, about love and pizza.

Whenever I go to a Frank Hurricayne show, every single conversation in the club runs something like, “Man, I just talked to the strangest dude. He looked at me and went ‘waaaassuuuup, heavenly brother, Heeeeeellllllll yeah’ and was so mind bogglingly posi about everything I said.” People can’t wrap their heads around Frank’s speech patterns—it’s like a Skype chat between a Jodorowskian mystic, Too $hort, and a motivational speaker. At first you’re like…man, I can’t deal with this shit right now, this is too intense. Frank is a heavenly, lyfealtering gangster and he’s on some total other level. — Nat Roe

Here is exclusively for the following interview a recording of Daddy Sumlang Blues from the split 12" with his friend Invisible Dave who he toured with, when their car broke near Moses Lake, WA (listen to Moses Lake Blues Story).

Hey Frank how are you and where are you right now?

I'm doing great! Just finished an incredible tour of the Midwest, east coast, and Canada and feelin' awesome! I'm currently living in a crazy awesome warehouse in Allston, which is in Boston!

How was your last tour?

The tour was incredibly awesome and successful! I made so many great new friends and reconnected deeply with many homies across North America. I played with so many great bands and was really blown away in every way.

What was the best and what was the worst station of that tour and why?

It's hard to say but I think my favorite stop on the tour was maybe Montreal, where I played to the holiest audience of ultra awesome people, which was also the case for almost all the shows, but there was an especially spiritual vibe in the air that night! There wasn't any spot I would say was the worst, cause I booked this one right! A blessing!

Tell us about your musical background and the magic forces that bring country blues and gangsta rap together in one person.

My musical background is a spiritual thang I grew up in the dirty south, North Carolina, South Carolina, Tennessee and Georgia, so I was feelin the southern gangsta vybes from birth! I always felt drawn to holy melodies, and hip hop, and the natural sounds flowin' all around, rivers and wind and the sounds of holy gangstas on the spiritual path of life! I started doing a lot of hiking and exploring in my late teens and then the mountains started pumpin' vybes into me! I then moved up to the northeast and started living in cities and getting those vybes in me and I love it all and it all definitely influences my music and everything I do.

What inspires you, what's the music you are listening to lately?

Some of the music that's inspiring me right now is Ray Lynch, a psychedelic playa from the 70s who put out some life-altering albums, Deep Breakfast, No Blue Thing, and more. And this dude from back in the day Dave van Ronk, and recently also the holy bro Peter Lang, he is off THA chain, that album Lycurgus is the real MOTHAFUCKIN deal!

Your album is like an American road movie; all these weird characters and the possibility to just disappear in the mountains or the woods.
What does your country mean to you? Is there still something like an American dream?

I love the the US! It's an incredible and huge gangsta spot that always in blowing my mind and showing me something new and amazing! I say definitely the American dream still exist and I feel like I'm living it!

You mentioned the Roan Highlands are your favorite Mountains. What makes them so special?

The Roan highlands are my favorite mountains! They are mystical and harsh and beautiful and they saved my life and almost took it too! The peaks like King Hump Mountain and all the balls are places of worship powerful beyond words!

Did you already hike the Appalachian Trail or is it on your list? If yes, how was it?

I've hiked like 1500 miles of the Appalachian Trail, from Georgia to the New York/ Connecticut border! I plan to finish it someday soon! It is a spiritual experience beyond words walking that holy trail for months at a time, the people and the bears out there are the best in the world!

What comes next? I read there is a Spoken Word/Comedy album coming out?

There's lots of stuff coming up in the near future for me, I'm writing and workin out stuff for the next Hurricanes of Love LP which is gonna be INSANE! The comedy tape you mentioned just came out and I'm really proud of it! It is a real ripper, it'll blow your mind! I'm almost finished with a psychedelic non-guitar instrumental album that I'm also really proud of. And there's lots more comin soon too!

What about your plan for coming to Europe? Is it still on the plate? What are your expectations about Europe?

I'm gonna be touring two weeks of every month this summer! I'm coming to Europe in late August/ early September to play the festival of endless gratitude in Copenhagen and I'm gonna play a lot of other places too! I'm figuring that tour out right now and am SO EXCITED!

Anything else you want to share? Hash brownie recipe? Favorite food from your region?

Lastly I'll say that my favorite food over here is definitely the spiritual pizza pie, I represent a lot of pizza places that I love across North America, my favorite place being L and B Spumoni Gardens in Gravesend, a neighborhood in far south Brooklyn! You gots to try the spiritual square slice!

Thanks to Frank for the Interview and Patty for help. 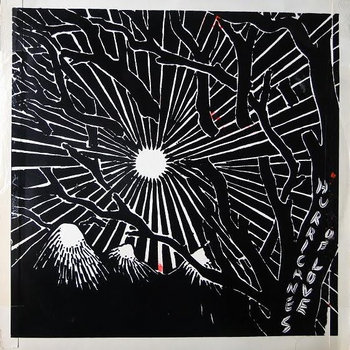 Recorded, Engineered, and Produced by Eli Winograd in early 2012 in his studio on the side of the holy East River in Greenpoint, Brooklyn. A limited edition run of 300 12" LP's were pressed for their 2012 Spring US and Canada tour.