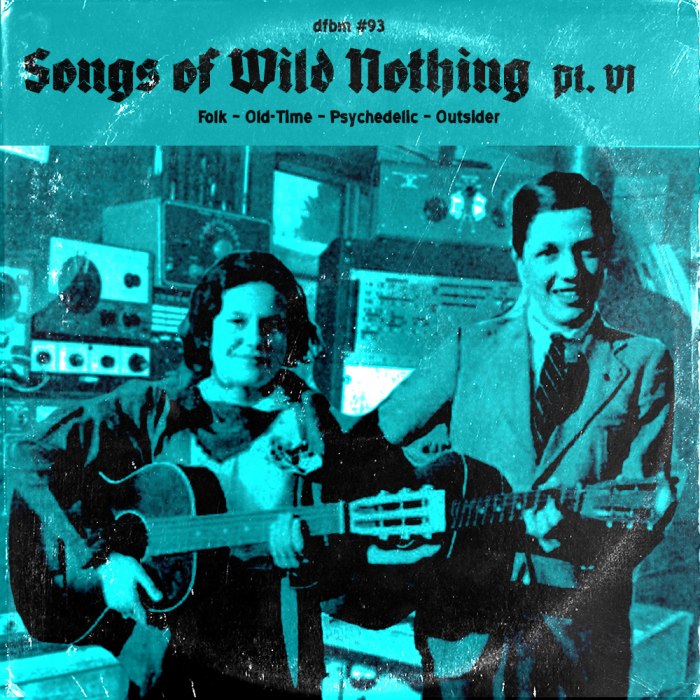 It's been a while since the last Songs of Wild Nothing mix. I am a bit behind with the music stuff, but I've found a lot of weird old and new music over the last months, so it was easy to compile 33 tracks to a two hour mix. Hopefully you have the nerves to listen to the end. It's again a mix from worn out folk records, some old time tunes, weird internet findings and the latest from under the radar.

We are starting with a mic test of home recording country singer J.J. Thomas. He's counting and tries to find an appropriate reverb effect. Pay attention to his kids counting down to launch a rocket.

From the tribute to the recently deceased Mr. Tambourin Man, Bruce Langhorn comes a short piece by James Jackson Toth. The compilation is quite impressive by the amount of people who contributed. Props to Scissor Tails Records for putting it together.

I wrote a bit about the Tom Armstrong reissue of his rare, privately pressed album. It's a nice homerecording/bedroom psych album that Tompkins Square made available again

Then there is an interesting acoustic collage like piece from Maurizio Abate & Matteo Uggeri followed by another artist from Italy, Enrico Marcandalli. This piece reminds me a bit on the opening of The Hired Hand by Bruce Langhorn. I posted some of Marcandalli's music before. He released quite a few recordings in the mid eighties, ranging from virtuous guitar pieces to home recording experiments. He was influenced by Fahey and Basho all kind of (guitar) music from around the world and created an interesting body of music, that is virtually unknown. I'd like to bring back some of his music. Stay tuned.

House and Land is a duo, consisting of Sarah Louise and Sally Anne Morgan who are going to release an album full of beautiful mountain songs on Thrill Jockey Records. Congratulations.

And another friend who scored a proper vinyl release deal is Moses Nesh. With his signature singing and delicate guitar picking is Nesh one of the new voices of old time music.

Mysterious releases like the ones from Jandek on Corwood Industrie are a record collectors dream. With the internet, those mysteries are often resolved. In the case of Robyn Nice, who recorded an album as Terry and under many other pseudonyms, the enigma seems to be still intact. Nice released a bunch of records since the early 2000. All are influenced by the private press/psych releases from the seventies. The music ranges from bleak stoner rock to downer folk par excellence. There is a website1 about that whole affair incl. some downloads.

Much more interesting was it to learn about Marlin Wallace's project The Corillions2. Wallace was a hobo who jumped on trains to travel through the US. He floated in a nutshell on the Amazon River and when he got back to Springfield, MO in the seventies, he started to write and record music. Till today, he copyrighted over 1000 songs and is still recording and making CDs. He's a prolific writer with a mission to warn about the Reds (all his records read Fight Communism) who torture him with laser beams from outer space. Other songs are about marsians, ghosts, boxer, the jungle, insects, railroads. Wallace incorporates country, rockabilly, blues, rural gospel, and pop. Blood On The Hands from 1977 has a quite timeless message by looking at the current events in the USA.

I found the Ilene Rushing song on a blog that is deleted now. The poster referred to the piece as "Dallas Drug Country". Ilene sings about taking LSD and getting high. As often with posts about "real people records" the artist or some friend finds it and leaves a comment. In case of Ilene it was her brother and he had no nice things to say:

Well damn if that ain’t my little sister who ran away to Dallas to be a hooker drug doer and a wino. I know here trashy voice anywhere. She said she cut a record there but I didn’t believe her cause she was a lyin low life piece of crap to me and my parents. I think shes dead now. Good to know she did something worthwhile before they ended up throwing dirt on her.

Glad I saved a screenshot of that original page3.

Between all the weirdo stuff you will find some old-time strumming and fiddling by Skillet Gap with Andy McLeod, Foister and Nancy Caldwell with a raw mountain hymn, some music from Thailand and the Sahel zone and fresh tunes by Donovan Quinn, Wes Tirey, Jonathan Nankoff, Jake Xerxes Fussell.