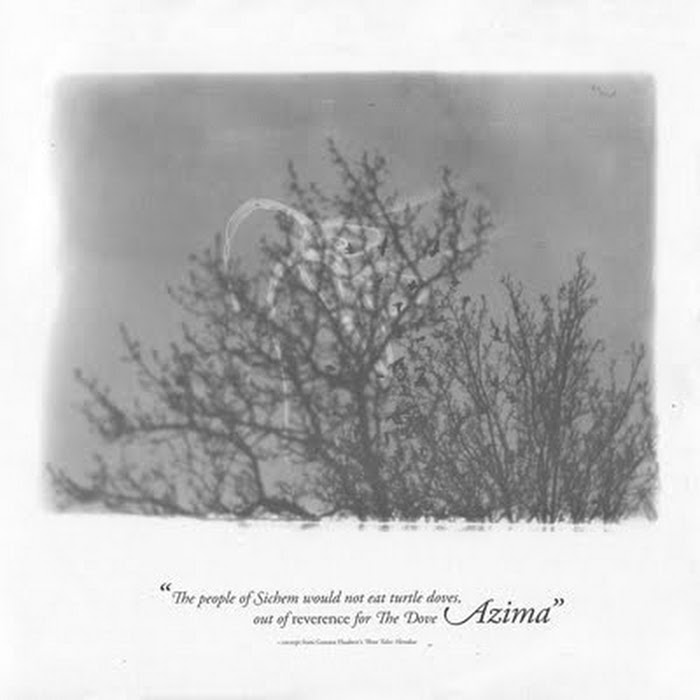 The Dove Azima is the new moniker of Zachary Hay who released a private press record as Bronze Horse last year. His new album goes a step beside his former release and has more improvised atonal elements in it. Much more in vein of Jandek's lonesome recordings.
It's really strange to listen to this record, you can hear the isolating silence it sometimes feels like sitting inside the guitar body while Hay scrap the steel strings, let them ring and bend them, playing loose patterns.

“Moving to the outer fringes of psych-folk, The Dove Azima is a deeply American recording. This solo project of Zack Hay has folk sensibilities much like John Fahey’s and hearkens to roots music from an era before the cultural tributaries of rock, country, and folk had parted ways. American avant-gardists have also crept much more into Hay’s sound since his last, more straightforward album, Bronze Horse. Hay himself had written of his interest in naïve experiences with guitar and he seems to have stumbled upon the steel string’s extended faculties a la Eugene Chadbourne; extended guitar techniques in general are almost never as visceral and hypnotic as they are on this LP, however. Hay’s detuned meditations can sometimes sound as weird as Jandek or sometimes lush and heady like Harry Partch’s microtonalities. Like a decayed American flag you found buried in the woods, The Dove Azima is one of the more brilliant pieces of Americana I’ve ever heard. It begs for many repeated listens and one oughtn’t neglect such a request.” – Nat Roe, WFMU

I recently read an article about the comparison of every newer guitar music release to John Fahey. Nice sum up.
9/10