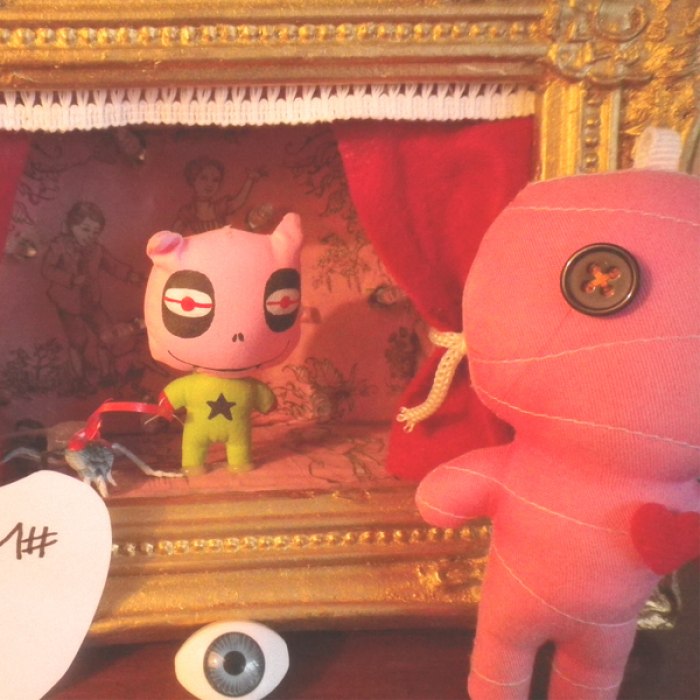 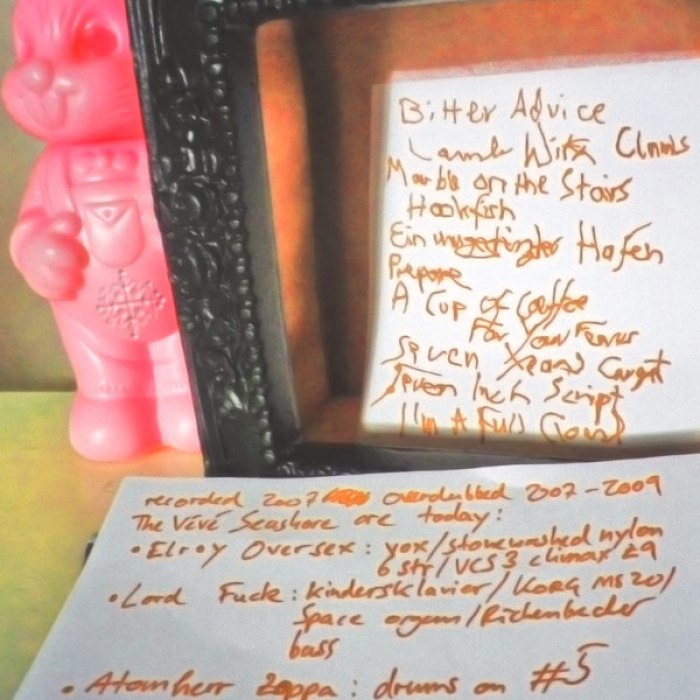 After a mysterious disappearing of their debut on low weight vinyl we rerelease this fine album as digital download.
Helium folk, digital breakdown and a rotten can of kraut(rock).
Follow the Vévé Seashore on their labyrinthine paths edged with marvelous simple pop hooks and wade through knee-deep psychedelia.

Prepare a cup of coffee for your fears and enjoy.

The Vévé Seashore is a music combo from New Orleans formed by Elroy Oversex and Lord Fuck. The first edition of their debut-album “Seven Years Of Gulliver” (on purple low-weight vinyl, 2007) was sold out immediately and is now a rare artefact for collectors – though the band never performed live.
DFBM is happy to re-release that surreal sweet music now as digital download.
“Seven Years of Gulliver” – though absolutely incoherent regarding recording quality – unfolds its own strange magic after taking the first sonic hurdles.

“Seven Years of Gulliver” is another release on Dying for Bad Music, this time by The Vévé Seashore. The album was originally released on vinyl in 2007 and here we are now with a download re-issue. The VS consists of Elroy Oversex on vocals, guitars, etc and Lord Fuck on keyboards and bass. On one of the album’s 15 tracks they do have a pal hitting the skin of some drums. A couple of tracks do have a handful of minute’s length, but most of then are shorter pieces, just a few minutes long. It’s mainly psychedelic, weird folk music. Syd Barrett? No, it was just in the beginning of the album. Maybe Kevin Ayers would have been better in comparison. My favourite track is the 4-track ‘Seven Inch Script’ suite and ‘I’m a full cloud’, moments when they let the music fly away in surprisingly directions. I like to be surprised, like in the middle of ‘I’m a full cloud’ when suddenly the music completely flip out, like player, loudspeaker and half of the Universe break down. And it’s just a trick.
— Terrascope

…from the very beginning track “Bitter Advice” we can find dark & hard-touchable electronic inferno, plus, dreamy & hypnotic acid folk (oh, just like the Japanese acid folk pioneer The Folk Crusaders!) following that. Another folk strategy can be found in the second short one “Lamb With Claws” or the next “Marbles On The Stairs”, with electric voice effect and freak-out synthesizer-based sunburn on the background. Oh yes, very eccentric guitar rampancy in the end of “Lamb …” is also addictive, and the latter of “Marbles … “ is exactly psychedelic brainwash shower. Just via such songs like those, let me say, can dig up Krautrock-flavoured Acid Folk.
“Hookfish” is a delightful folk song that has already been distributed as a freely downloadable material upon their Dying For Bad Music website. However even this fantastic folk cannot be typical one … around it pretty (and somewhat kitty-tasted) voices, mad organ sounds, and the very last electro-ice stumblin’ over. Guess they should never complete everything along with typical stream, and we can be immersed into this strange novel attitude via their tunes. Actually, “Ein Umgestürzter Hafen” is my favourite song in this album. Very growlin’ and rumblin’ infernal psychedelia, under an unpredictable noise & sound storyteller … want you to let me consider this is an undoubted masterpiece, to be honest. Wonder why they could show us such a tremendous atmosphere through their psychedelic launcher. On the contrary, another delightful and enjoyable folk has come here – “A Cup Of Coffee For Your Fears” – this song title and lyrics are very cynical though. Take a rest with a cup of coffee under such a simple folk … it’s a wonderful day & night. :)
And from the following stage “Seven Years Suite” get started. Drone acid folk with sharp-edged electronic maneuver and terrible bubbling mud, bright & fine acoustic cool wind under an electric bird song (a bit keenly crazy) or a twittering gnome … the fourth part “Seven Inch Script III” is another personality of them methinks. Sweetness, madness, deepness, shallowness … intertwined with each other. This suite has no break in it, and we can listen without breathing really. The last “I’m A Full Cloud” reminds me a Japanese noise violence Hanatarash … the middle noisy part is a bit boring, but upon the last folk one (and “I feel so useless” lyrics) why cannot I weep gently? Psychedelic and garagey scrubbing kicks, gentle and hearty folk cotton fields … various gems are around them and their album indeed. Totally what a splendid Kraut-ish Acid Folk stuff.
How wonderful and fascinating this bulky gap between sweetness and madness is …
— Keishiro Maki